Getting to know the customer by learning somebody’s style and personality and saving the planet at the same time is what Donna Wuyts de Salvo’s Penny Lane Exchange and its fashion revolution at its core is all about. Classy vintage clothing and accessories are still hot and a little island like Bonaire is no exception. 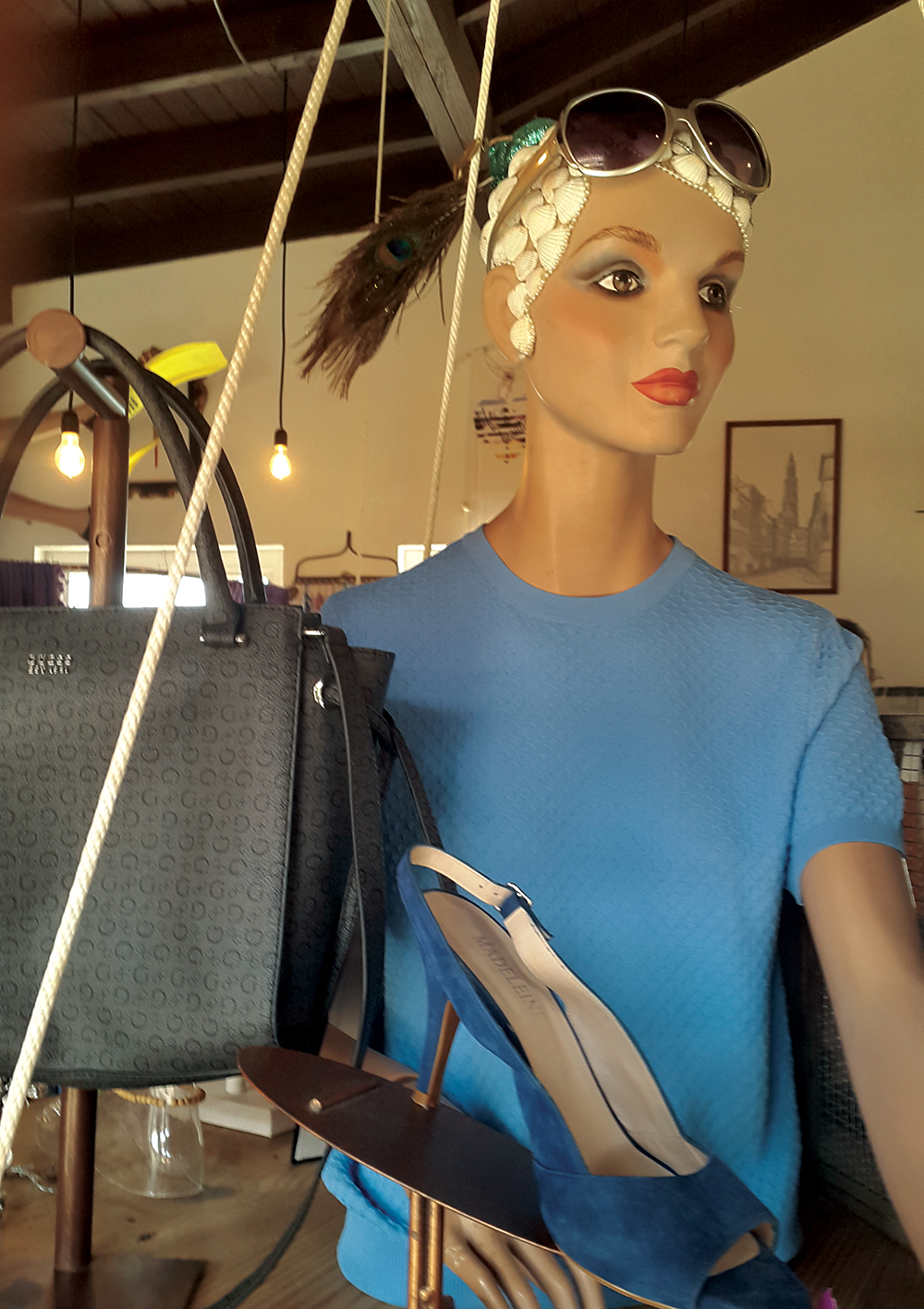 Entrepreneurial Blood
Owner Donna’s love and passion for vintage fashion actually started very young. Since she was the younger sister, she got to wear her older sister’s clothes. But Donna was much taller and high water trousers were not really fashionable. To solve the matter her mother would add something like lace to Donna’s clothes and by doing so she basically personalized, modernized, and turned them into high fashion, which then suddenly everybody liked and wanted. Just like the modernized clothes, she also refurbished furniture. Donna’s mother would take her daughters to garage, porch or tag sales or just bring dumped furniture home, start working on them and within no time the acquired pieces would be unrecognizable and ready for a whole new life.

Besides that creativity, Donna also inherited her parent’s entrepreneurial spirit and sense for adventure. Whether it was her mother’s own crèche in upstate New York or her floral delivery service in Connecticut, her whole career she had been an entrepreneur and her own boss. As her father and stepmother, the former owners of the Bonaire Reporter were in Bonaire.

Setting-up Shop
Penny Lane Exchange was simply mend to be. As soon as Donna decided to set up a consignment shop, everything just seem to fall in place perfectly, even though the road to get there was a little bit bumpy. It sort of started when Donna had made it as a personal assistant to the director of a blockbuster movie Production Company in Los Angeles and lost a friend in the September 11 attacks. Her whole world got shaken up. Reevaluating her life and what was truly important, she came to the conclusion that she wanted something different with more meaning and sense of purpose. Her study to become a Feng Shui practitioner seemed to be what she was looking for. After she went to China to finalize her studies, she started her own Feng Shui practice in L.A. Feng Shui alone, however, wasn’t quite enough. She was still missing something.

From the eighties on she would always leave the States to visit her father on Bonaire during the holidays. On one of those holidays she already had met her future husband, although she didn’t know it at the time. It was this love with whom she reconnected after they ran into each other in 2001 during Carnival that seem to be the missing ingredient. The couple became inseparable and Donna moved to Bonaire in 2002 and began her own Feng Shui Dimensions studio. They got married in 2005 and by 2009 her daughter was born.

Nevertheless, a life changing event rocked her world again and forced her to change course. Her mother got sick so Donna went back to the States to take care of her. It was then that her idea to set up her own consignment shop took more form. She had already seen on Facebook that there was a growing demand for vintage in Bonaire. Thus, Donna read the book of Katie Holmes on how to start a consignment store, went looking for a nice and affordable location in Bonaire, sold her car to invest in her inventory, made racks out of broomsticks, visited several second hand outlets in California, and found her mentor Christine. Mentor Christine helped Donna to structure the shop, policies, price tag software, and framework included. By 2014 she was ready to open Bonaire’s first consignment and second hand shop, Penny Lane Exchange.

Saving the Planet
The fashion industry actually is one of the major polluting industries in the world. The industry contributes to differing forms of environmental pollution, including water, air, and soil pollution. The vast overproduction of fashion items , the use of synthetic fibers, and the agriculture pollution of fashion crops makes it responsible for at least ten percent of the carbon footprint of the world as well as it being the second greatest polluter of local freshwater in the world. To actively do something about it, Donna tries to raise awareness about the necessity to protect the Bonairean marine park and the impact of our way of life on the island’s environment and its reefs.

According to Donna, for example, 85% of the landfill consists of textiles. Therefore, repurposing, recycling and consigning clothes reduces our carbon footprint and helps the island, its nature, natural resources and its marine park.

In Store
Centrally located on the second floor of La Terazza in the middle of the Kaya Grandi Penny Lane Exchange offers all kinds of pre-loved clothing for women and children, jewelry, shoes and accessories. Customers will not only find high-end fashion brands like Dolce & Gabbana and Valentino, but also H&M and others less known designers. The sizes range from XS to XL and one can be certain that the acquired classy vintage piece is unique and not to be found anywhere else on the island.

Donna and her part-time employee change the inventory daily and the consigned clothes never stay more than 65 days in a row, so there is always something new to find. Moreover, since Donna has her own shopper in the US, every costumer can dress according to the latest vintage fashion and let their future be modernized.

Last but not least, Penny Lane will be celebrating its fifth anniversary in October 2019 so check out the shop’s Facebook page for the latest news on the celebrations and other offers.