When the Minister of Economic Development Mrs. Giselle Mc William, was interviewed for this article, the COVID-19 outbreak was not yet declared a pandemic by the World Health Organization. Entrepreneur talked to the Minister about her view on the economic development of Curaçao and the possibilities for local entrepreneurs. In the meantime, everything has changed. The island and actually the whole Caribbean have closed their borders for incoming flights and cruise ships and have declared a lock down to contain the spread of the disease. With the effects of this global outbreak and its impact on the economy still unknown, one thing is clear; it’s now practically impossible to make any reliable projections about the future. All the focus is now geared at flattening the curve to be able to deal effectively with the disease. Minister Mc William has the challenging task to lead Curaçao’s economy through this defining moment. The crisis will eventually pass, but now is the time for Curaçao to show its resilience and its ability to adapt to change. This is the time to take important steps that will define the island in the future. to come up with the best decisions to face this global challenge. One of them is to temporarily close our borders for incoming flights and slow down 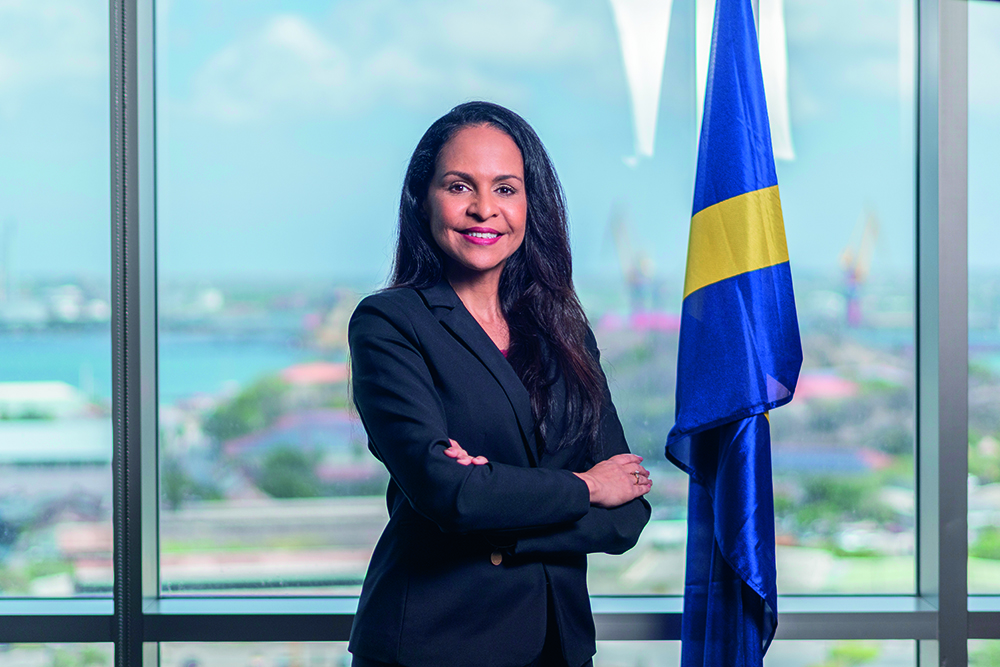 Last year former Parliament member Mrs. Giselle Mc William bravely accepted the task to lead the economic development of Curaçao after the former Minister had to step down unexpectedly. In her acceptance speech, the Minister explained her vision and intentions and has been working steadily on the implementation of her plans to create more jobs with a leadership based on good governance, transparency, and inclusion. Little could she know then that she would become part of a cabinet that has to lead the island through one of its most challenging crises ever.

After thorough deliberations Curaçao’s government took the difficult decision to lock down the island and close its borders for incoming flights from its main tourist markets, Europe and USA. While The the effects of the outbreak in those markets are still unclear, everyone has started to prepare for the worst. But how can one prepare for the worst when it’s still unsure what that will be.

Minister Mc William accepted the request of her party to assume this responsibility because she believes in the potential of Curaçao and its people. She was very clear about her intentions and from the beginning presented herself as open for suggestions from everyone. “Both experts in the economic field and people who want to give their sincere contribution to reach sustainable economic development for the whole nation and future generations”.

Job creation
Job creation was at the heart of her economic vision. To realize this, the Minister emphasized trade development. “It’s my intention to continue facilitating and stimulating trade for large, medium and small companies, with an emphasis on micro-businesses. She embraced tourism as one of the principal economic pillars and showed determination to create opportunities to attract more hotels and upgrade the existing ones. The development of the city center and more air connectivity should promote tourism and commerce. Other factors of attention were renewable energy, support for a future partner for Curaçao’s oil refinery and development of the harbor area.

Her economic policy also included the promotion of exports of products and services to generate more income for the island, attention for the financial service sector and promotion of the Smart Nation concept. With this transparent vision based on inclusion and a practical approach, Minister Mc William asked everyone despite possible differences of opinion to give her a hand to be able to construct the island that we aspire for ourselves and future generations.

After seven months in office the minister is convinced that there are a lot of possibilities for SME entrepreneurs to get a platform on which to develop successful businesses. Especially in tourism. That sector provides a lot of possibilities to find a niche and be successful. She thinks that it’s important that the entrepreneurs realize that they have to search for these opportunities.

“We have not yet realized the importance of the tourism sector for Curaçao. We are slowly discovering the different opportunities that it offers. If we compare it with 5 years ago, the awareness is growing. We see that nowadays people consider a job in hospitality as a serious career opportunity”. They don’t consider it just because there’s nothing else to do. There are also business opportunities. Such as tour operators, tourist guides and many more. These should be promoted especially among the youth.

An example of how these opportunities could be used was shown by the initiative to make the Sha Capriles Kade where the floating market used to be, a local popup handcraft market. This was a huge success and demonstrated the demand for local souvenirs. According to some critics, the cruise tourists do not spend a lot in Curaçao. This may have to do with the fact that the cruise ships pass several other ports before arriving on the island. If what the tourist finds here is more of the same souvenirs that they already bought, they will not be inclined to buy them. The good thing of the Sha Capriles kade initiative is that it gives the local artisan the chance to sell directly to the visitors and expose Curaçao’ creativity.

Entrepreneurship and Culture
The combination of arts, culture, food, tourism and entrepreneurship can blend well. Mc William thinks that Curaçao’s local cuisine could be exposed more. The local Foodmart ‘Marshe Bieu’ in Punda is already quite popular among tourists.

The possibility to exploit this trend can fill up a need in the market for tourists who are looking for a ‘Curaçao experience’. Every dish has a story, says the Minister. Its origin, ethnic background, era, season, these are all topics that can be added to enhance the culinary experience. “It would be a pity not to exploit these”, says Mc William.

The Otrobanda side of the city, especially in the Rif area, has the potential to develop into an interesting recreational and touristic area, with eateries and cafés. This area should serve as a place where local entrepreneurs can expose our authenticity but also develop themselves as entrepreneurs. It happens that local SME’s express the perception that they do not get a chance to develop while others who come from abroad get more opportunities. Mc William thinks that we should also ask if we were on time. Or did we wait too long with the idea and did not have the courage to carry out our plans? She thinks that it often happens that local entrepreneurs think about their plans two to three times before taking the step and often choose safety. “To get over that hurdle, we should have more courage and believe in our country”. An example of that, is the development of the now vibrant Pietermaai area, which used to be completely abandoned. “None of us took the initiative to develop it. We were here, but we did not see the potential”. Thankfully now there is a change. In areas such as Scharloo, Fleur di Mary and Seru di Otrobanda, the main investors are local people. According to Mc William local entrepreneurs woke up, smelled the coffee and also started to act.

Refinery and Harbor area
Another focal point in the economic development is the Oil Refinery. Last year’s exposition about the role of 100 year Oil refinery in Curaçao, emphasized how important the refinery is in the economy but also in the lives of Curaçao’s people.
The refinery is completely entwined and so interconnected with the community that it’s almost impossible to look at it separately. The uncertainties related to the end of the lease agreement with PDVSA were not favorable for investments in that sector. Now there is more clarity about a new operator. New opportunities will arise for other enterprises compared to 100 years ago. The new operator is also looking into possibilities of sustainable environmentally friendly energy. This may be different from what Curaçao is accustomed to. Besides the traditional fossil energy, the focus will now be also on renewable energy. “Local entrepreneurs have to step into these developments to see how they can benefit from them. The government
will support them in those endeavors”.

The harbor area project is also important. The Curaçao Port Authority (CPA) is making the shift from a traditional harbor operator that deals with ships and towing services, to a port landlord, that includes real estate management. CPA is now pushing a whole economic expansion around the harbor. In that sense the Minister refers to the so-called Kop van Scharloo. A real estate project with a several apartments, and Horeca businesses.

These shifts -of the refinery and of the harbor area- will take place little by little. Traditional industries will be adjusting to the new realities. “We should not let them do it alone. We have to take care of our people. The local SME’s need to be part and grow with these developments if they do not want to be left behind”.

We hope to see you soon
In the meanwhile, the tourist board has adapted its promotion campaigns in light of the inbound travel stop and started to prepare for the period after the crisis. With the spotlight on the moment when the island has the situation under control and its most important tourist markets have recovered from COVID-19 the Minister is showing the way to the future. “Our strength comes from how we care for each other. The well-being and safety of our people and our visitors remain our top priority. Our government is working closely with our community, private sector and international friends to come up with the best decisions to face this global challenge. One of them is the temporary lock down. We encourage our visitors not to cancel their trip to the island but postpone it for another time. This crisis will pass, and Curaçao will still be right here, waiting for you when this is over to continue offering our unique and warm Curaçao experience”.

This is the first part of a series of 4 articles about the economic development of Curaçao. A development that has come under great pressure due to the COVID-19 crisis. In the coming editions of Entrepreneur, we will elaborate more on this topic.