The future belongs to the young

The future belongs to the young. At least that’s what they say. But is that the case? I doubt it sincerely. My story starts with Jeffrey. He’s young and he is on my roof. With a paint roller in his hand, the boy turns one roof tile after another red, while listening to the music of RockKorsou. During his break, he climbs down the stairs. Together we look at the now bright and radiant roof. I give him a can of Red Bull; working in the sun is tough and he could use some energy. Do I have any more chores for him?, he asks. “Corona, Mr. Dick, everything is slow slow.” Jeffrey speaks some Dutch, but it shouldn’t have a name. I ask him: “Do you speak Dutch?” He answers: “No, sir, rather Papiamentu.” I try: “And English?” “No sir, mi ta preferá Papiamento.” 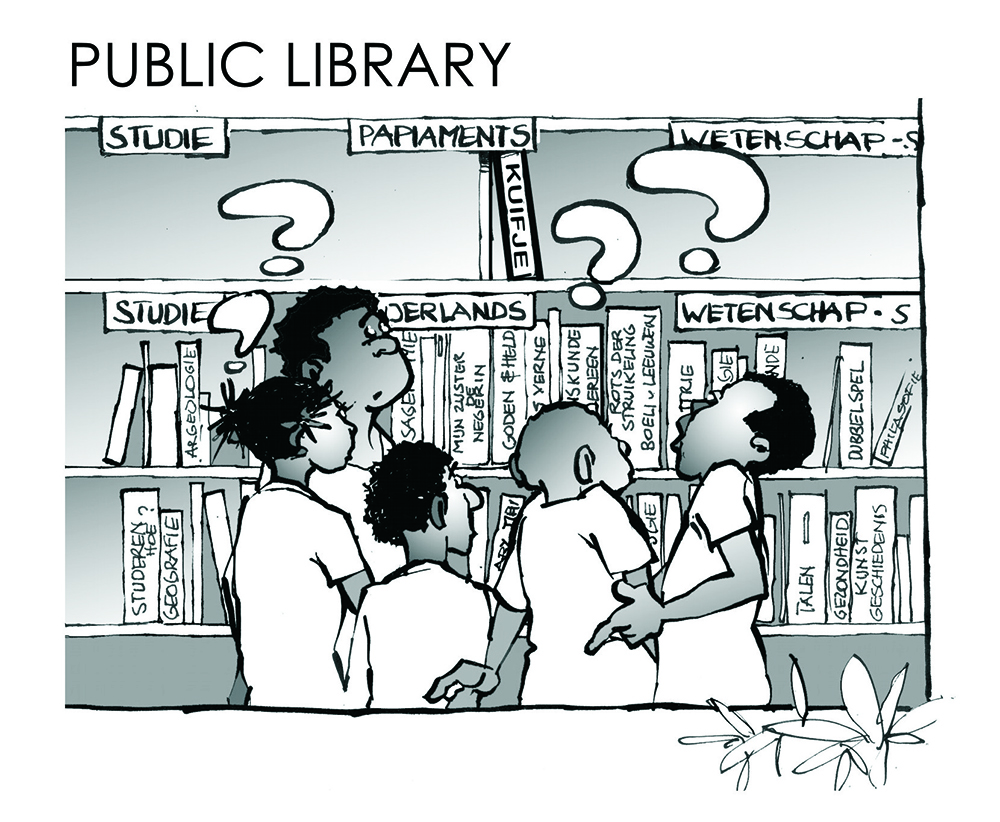 Well, that’s lucky, I speak that language too. Admittedly with an accent and also one with which I could immediately enter the monastery. But at least it is Papiamento. Many other Makambas on this island cannot say that. Just like many of Jeffrey’s peers, inversely, cannot speak a word of Dutch or any other language, except for maybe Spanish.

When I am working on the island for television or radio, I now know that I have to interview people in Papiamento, at least when they are under the age of thirty. Above thirty to seventy it is usually possible in Dutch and above it depends on the education of the older person.

On the opening day of KAP, popularly still called Peter Stuyvesant College, I asked a 13-year-old pimply adolescent if he had enough energy to start his high school career today. The boy looked at me desperately. “No, sir, Papiamento….”. I also had to address him in Papiamento, because he did not understand me. My heart sank into my boots for a moment. That will be a difficult school career, I thought. As the language of instruction in Curaçao secondary schools is still real Dutch, just like the teaching materials in the classroom.

Starting a discussion about Papiamento in Education is generally less safe than a jump from the Juliana Bridge. In the eyes of politics, language is “identity” and you cannot touch that, certainly not as a white Dutch person. That is understandable. We Dutch don’t have a good reputation when it comes to showing respect for language and culture of others. In colonial times Papiamento was despised and regarded inferior.

I might think we have passed that point in the 21st century. But the legacy of Frank Martinus – with all due respect – and his political buddies still haunts the island. It was based on UNESCO’s 1953 premise that every child has the right to an education in the mother tongue. And I agree.

But Unesco did not add: our children should only be educated in their native language!

Jeffrey is from Mahuma. As a four-year-old child he had received a booklet from the pastor, written in Dutch. It was called “How do I become an astronaut”, by writer Loes Hazelaar. He wanted to know everything about stars and planets, about astronauts and rockets. At the age of six, he thought he would certainly get that at school.

But by the time he could read real books about the subject, his language deficiency was so big, that the Dutch-language book – for lack of a Papiamento version – was abacadabra to him. In any case, he did not understand all those books in al those other languages.

Juana Kibbelaar, education advisor and trainer, later explained to me that this is about the shortcoming of our education in Curaçao. There are too few books in our native language to develop knowledge. And Dutch or English books use advanced language, while the Dutch that Jerry knows doesn’t go beyond the language he sometimes spoke at his football club: Shoot it in, you’ll be offside and I’ll see you soon.

Kibbelaar has been arguing for years to broaden that focus on Papiamento with one additional language. A language that provides access to knowledge. Because with 250,000 Papiamento speakers in this world, the range of books will never be large enough to read all the knowledge you need to succeed in life, to fulfill all your dreams. She does not argue against the choice to eliminate Papiamento as the language of instruction, no, contrary: she argues for a second language alongside Papiamento. Not as a subject in class, but as an instruction and colloquial language.

Jeffrey is good at painting, placing tiles and building walls and he will continue to do so all his life. He still has his dream of becoming an astronaut. But by now, he knows it is a dream and will probably remain a dream all his life.

Thanks to all those wise writers and politicians who projected their own identity crisis on our young people, our future.

On our Jeffreys. Dutch, English or Spanish they are strongly needed as Red Bull for the development of our young people. To give the young the future they desire.