Have you ever tasted the crunchy lilac salty fingers or the delicate flavored yellow cucumber flowers in one of Bonaire’s lovely restaurants? If not, you are definitely missing out and should do something about it immediately. 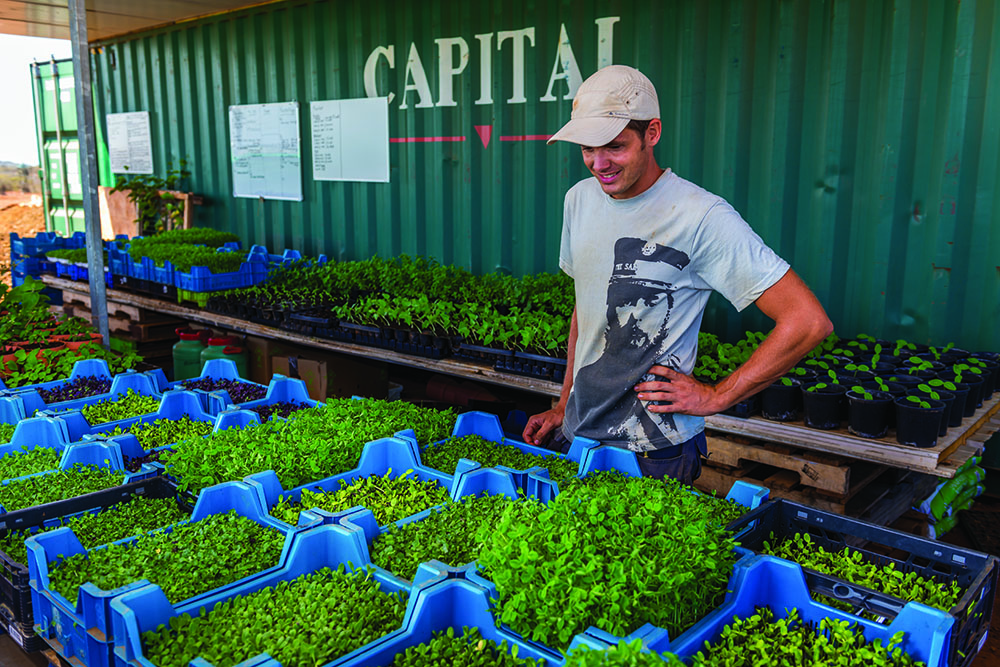 But if you did, you probably don’t know that you’ve had the pleasure to enjoy the fruits of the hard labor of Bonaire’s first and one and only private vegetable producer, Bon Tera. Even more so, you most likely had no clue you helped reduce the carbon footprint by ordering homegrown vegetables instead of imported comestibles.

Since September 2018 Arie Boers and Adriaan Goedgebuuren are working almost 24/7 to grow all kinds of vegetables, microgreens, herbs and other crops in their greenhouses on their 2.5 hectare leasehold land. The young owner of Bon Tera, Arie Boers already proofed he could farm on Bonaire and cope with the island’s harsh desert-like conditions during the dry seasons when he was working for a Bonairean foundation. After helping them to grow their own food and sell it to the supermarkets, he wrote a book on how to cultivate vegetables professionally and a year later he seized the opportunity that enabled him to start Bon Tera, good land in Papiamento. But knowing how doesn’t necessarily make the farming easy.

As we all know, cultivating crops is a tough and often not so thankful job globally, but on top of that Bonaire, particularly our sun offers growers some real-life challenges. Besides the heat, the draught, the bugs, and the birds that may well provide for a daily struggle, it’s also head-on pioneering, because there’s no actual farming community nor specialists you can ask for advice. It took Arie Boers five different

cucumbers species, for example, before he found the one that really flourished on Bonaire. But however the circumstances, every morning at six Bon Tera and its employees rise to the challenge, harvest the everyday orders of the Bonairean supermarkets and restaurants, and pack and distribute them preferably the same day.

The seeds of the various crops are either bought in the United States of America or the Netherlands. And after they’ve been carefully planted in Dutch topsoil or little slabs of coir, the different groups of plants get a special mixture of water and nutrients according to a unique recipe developed by Arie Boers himself. The generator for the programmed pumps that propel the water for the plants is actuated by Bon Tera’s solar panels. At night the pumps syphon the water into a big silo to cool it down and when dawn is breaking they dispense it. Since the precarious seedlings or full-grown crops for that matter abhor hot water, the water that gets heated by the sun during the day needs to be cooled. That heat is also one of the reasons why some of Bon Tera’s cherry tomatoes didn’t want to turn red but developed a nice shade of orange instead.

In other words, you can be sure all Bon Tera’s long beans, tomatoes, cucumbers and cucumber snacks, edible flowers, microgreens, arugula, basil and mint that end up on your plate are carefully selected and grown with passion, dedication and perseverance.

So maybe next time you buy some of their tasteful homegrown labelled beauties in the two biggest supermarkets of Bonaire or order them in restaurants, just think about it for a while. It will surely add more flavor to your meal and reduce your carbon footprint at the same time!