Aruba) the Harbor of Aruba 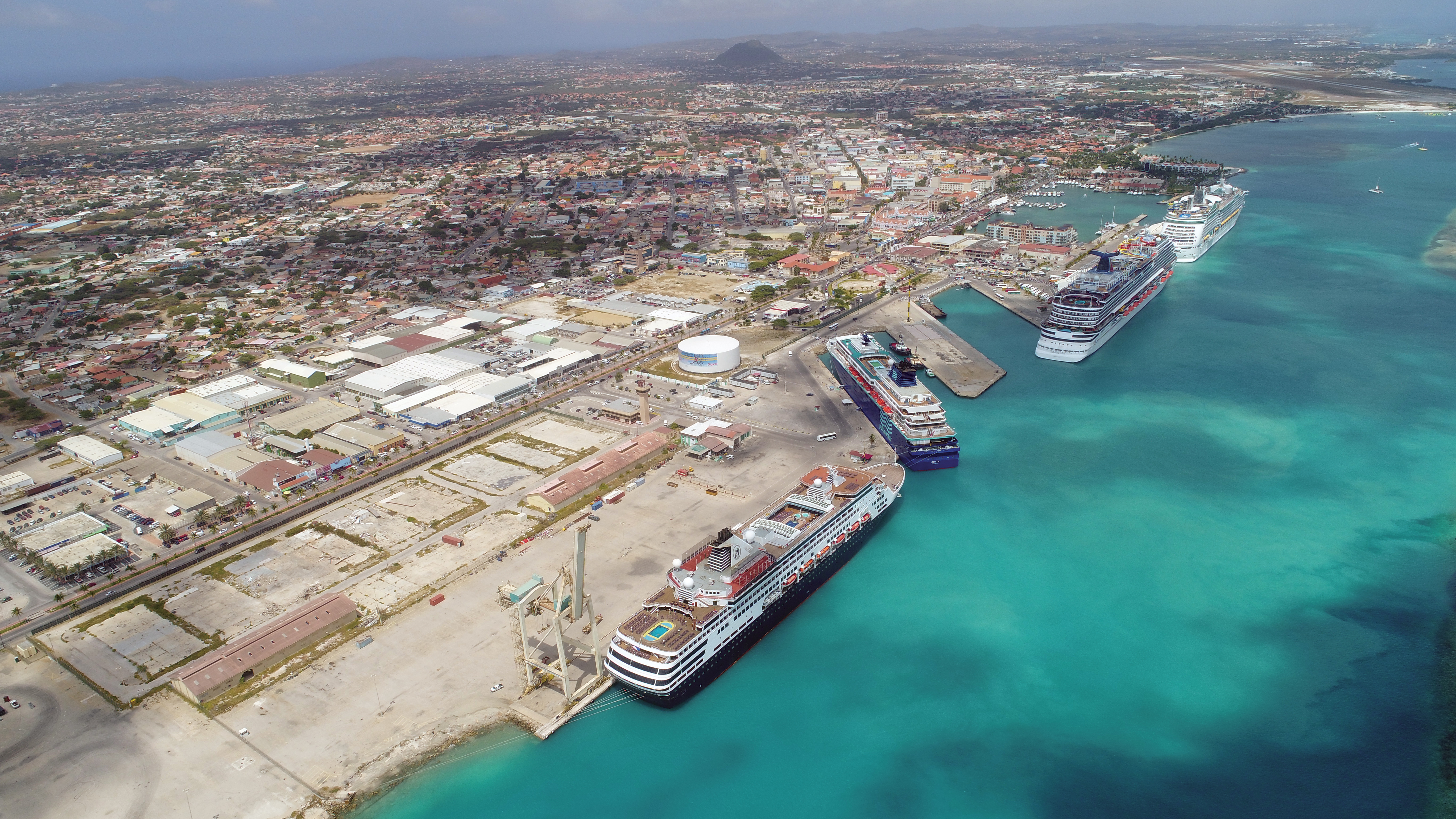 The main goal of both the Aruba Ports Authority (APA) and the Port of Amsterdam International (PoAI) when they signed a partnership agreement in July 2016 was to grow, develop and transform the harbor of Aruba into booming businesses and facilitate fast developing industries. More than a year later both parties are well on their way constructing and designing a vibrant
Port City laid out in the Masterplan
Port City Oranjestad.

A happy break-up
In order to make room for growth and development first of all the cruise and cargo port in Oranjestad needed to be separated.
This process started in 1994 and was completed in 2016 when Aruba’s new Multi-Cargo Sea Terminal in Barcadera took over the cargo handling.
The establishment of the new container port was a crucial step in paving the way for the desired growth of the cruise harbor and the economic development of the urban area at the waterfront. Because now the former cargo terrain could be commercialized, redeveloped and become a new integrated part of the city Oranjestad. Moreover the almost fifty acres of available land would give the growing cruise industry the necessary means
to expand and professionalize even more. And last but not least it would offer the opportunity to extend marina capacity to anchor and repair yachts in the harbor of Aruba. In short, this is exactly what the new urban development plan aims for, according to the appointed chief commercial officer (CCO), Lex de Ridder, and it is also the reason why the Port of Amsterdam (PoA) was chosen to assist Aruba. The PoA already did something similar when they developed the IJ and harbor area of Amsterdam in Holland.

The creation of Port City
According to the masterplan Aruba’s harbor area is bound to become a vibrant, economically flourishing and diversified port city within ten to fifteen years. To succeed parties like APA, PoA, Aruba Tourism Authority (ATA), the Directorate of Shipping Aruba (DSA) and other private and public stakeholders will need to work together in close cooperation. Creating and running a Port City is quite an undertaking in which each party involved needs to know its role, its tasks and responsibilities and act accordingly, the CCO explains. In organizational terms it means that private and public functions will have to be separated in order to capitalize on market opportunities and improve the harbor’s earning capacity. It demands an integrated approach to prevent fragmentation, ensure efficiency, simplify decision-making and establish a point of single contact. To reach those goals the development of the harbor area is carefully planned. Step by step an urbanist and landscaper are designing the spatial plan of Port City following the choices and decisions made in the multiple stakeholder meetings. One of those decisions for example concerns the expansion of the cruise harbor. To secure growth, improve the cruise port and accommodate the increasing number of cruise tourists in the future Port City will offer cruise companies a dedicated third quay surrounded with a high quality of public space.

Sustainable Prosperity for All
The brand new Port City won’t stand on itself but must become an integrated part of Oranjestad and the island as a whole. Allowing the whole of Aruba to benefit from its economic boost Port City will harbor a diversity
of businesses and services, different kind of hotels, and there are plans to build affordable houses for the locals. By doing so the port will attract investors and stimulate commercial activities, which will make the plan feasible and sustainable. CCO, Lex de Ridder stresses the importance of a good mix of harbor activities. ‘If you want a flourishing port and vibrant harbor areas you need to diversify and make it sustainable. The days a port could mainly concentrate on fossil fuels like oil are over. Although oil is still very important for Aruba, alternative energy sources are bound to take over on the long run. A prosperous harbor generates income from multiple activities which are beneficial for thewhole island.” Regarding sustainability, the use of alternative resources and generating income de Ridder thinks that the port could  also play a leading role in solving the problem of waste management on the Caribbean islands.
‘The entire Caribbean region is struggling with their (open) storage
of garbage that needs to be taken care of. Aruba Port Authority could use its facilities and business network,
for example to initiate a waste management cooperation between the islands and international partners and collect and ship off waste.’ According to the chief commercial officer it can become very interesting to look at new solutions for waste in the era of circular economy, especially in cooperation with the other islands. But just like the creation of Port City the key to success of such an initiative will be working together.

Lex de Ridder, born and raised in Harlingen, became interested in the port industry when Amsterdam decided to redevelop the eastern part of its harbor area. He got involved as a resident, and being an economist and specialist in logistical concepts at the time, he was intrigued. The idea that attracted him the most was that harbor projects and developments are very hands-on and have a direct impact on the long-term economy. According to de Ridder, it was exactly what he was looking for. The fact that working for the Port of Amsterdam, which he has been doing for over fifteen years, meant being able to act on a broadly orientated and international playing field made it even more interesting.

He was thrilled when the ministry and his employer asked him to go to the Dutch Caribbean to help the islands improve their harbors. It not only gave him the opportunity to work in a multi-cultural environment, but it was also a chance to add value and make a difference by creating harbors that
will benefit future generations.