Energizing the Youth of Bonaire 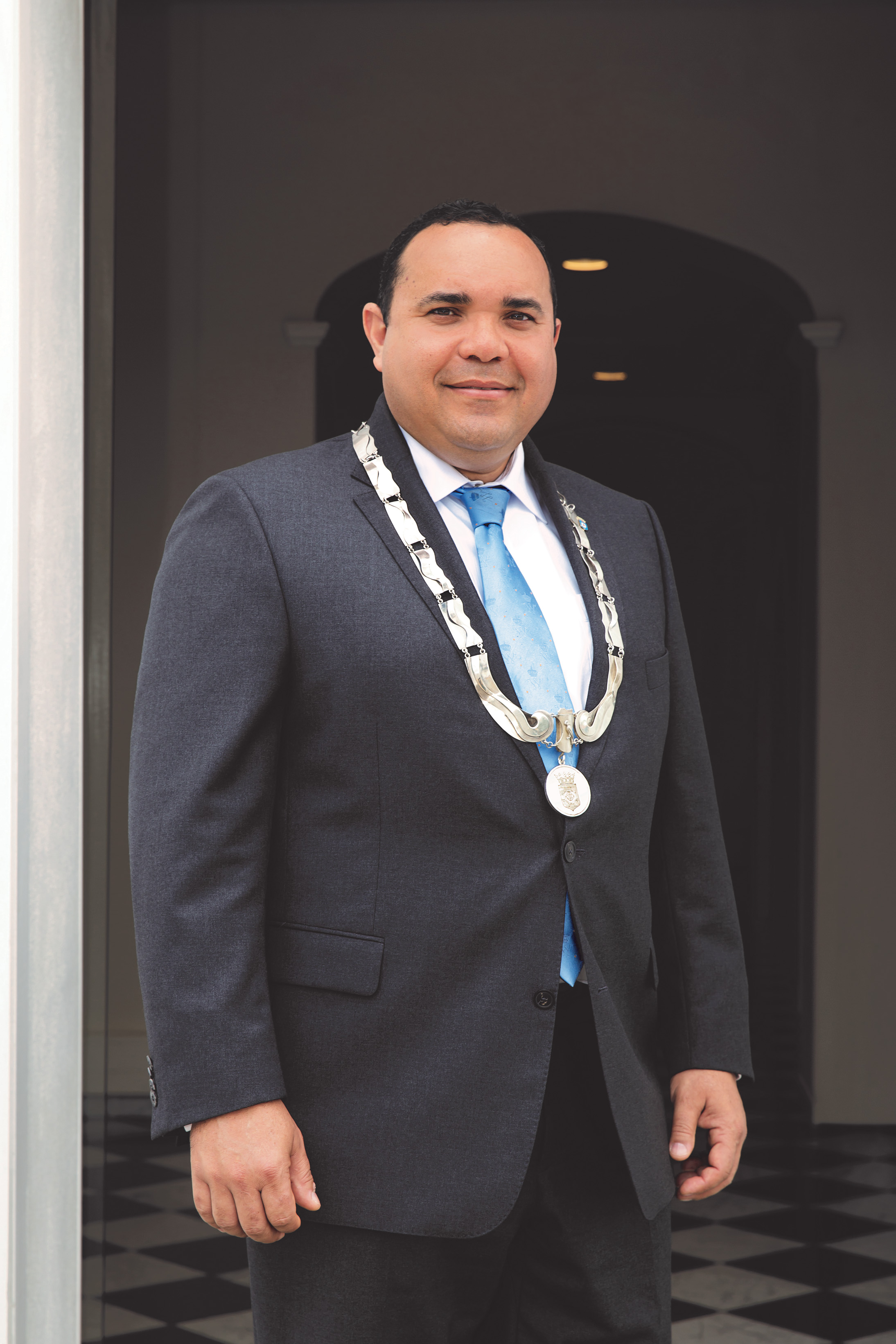 Governor Edison Rijna
After five months as Acting Governor, the forty-seven year old born and raised on Bonaire, Edison Rijna was appointed Governor on 20th of August, 2014, for six
years. Since then, he has been focusing his energy on improving Bonaire.
Because Rijna had just started his own successful recycling company, Bon Recycling, in 2011, and didn’t have that much governmental or administrative experience, it took some persuasion before he agreed to take on the responsibility and become the Governor of Bonaire. At that time he was Bonaire’s biggest exporter of containers. His carriers full of old iron, waste paper and glass were crossing the ocean. The corporate world he knew through his own company, his studies in Financial Business Administration, and his fifteen years of experience in the banking industry in Holland and Curacao. Ruling an island, however, was something completely different. Although his mother warned him never to work at that “yellow building” (the local government building), he is very happy to do so.
“Because you can keep on pointing the finger and criticize the government or you can go and try to do something about it,” Governor Rijna adds. In his current assignment as a governor, he feels he can contribute so much more to a better Bonaire. It was the main reason why he joined. As Governor his first and only objective is exactly that, the common interest of Bonaire.

Governmental structure
The position of governor is comparable with that of a mayor. The island’s local government is based on three ruling bodies. The first body is the Island Council (parliament), the second the Executive Council (cabinet) and the Governor is the third. The Governor presides over the Island Council without membership, but is entitled to give advice. He is the chairman of the Executive Council, which is composed of the Governor and the three Island commissioners. He is a member of the latter and, in this council, his vote can be decisive. The Governor’s main and official responsibilities are to execute the decrees of both councils, represent the local government and uphold public order and security.

Professionalizing and modernizing the government
Back in 2014, Edison Rijna started with turmoil. His predecessor had resigned after of a vote of no-confidence by the ruling party members of the Island Council. The situation was adversarial and people were fighting one another. Therefore, his first task was to set the minds of the council members at rest. As soon as that was accomplished, he could aim for change. Especially the political system is in need of change, according to the governor. Although he admits it goes reasonably well at the moment, Rijna wants to professionalize and modernize the political system. During the official Island Council meetings which are open to the public and broadcast on the local radio and television, he doesn’t really gt the chance to enhance its level. But in the Presidia, the non-public meetings with members of the Island Council, he certainly gives them feedback and tries to improve their performance. He does the same thing in the Executive Council. If the commissioners are pressuring for party politics or entering the path of self-glorification instead of focusing on the common interest, he intervenes. Professionalization and modernization of the political system of Bonaire goes slowly and by one little step at a time, but gradually the system improves.

Learning to fish
One of the governors’ wishes is the participation of so called ‘yu di tera’, local or regional people on high posts. As a member of the selection committee he would
like to see locals becoming the four chiefs of the fire department, the police, customs and prison for example. All three governors of the Dutch Caribbean islands are either local or from the region. People born and raised in the Caribbean know the language and have their roots in the culture and collective history. They don’t have to learn to understand and deal with the ways of the peoples and or get familiar with them in order to find the best suited solutions, they already are. Moreover the best way to get things done, grow and develop the island and its inhabitants is to teach our own, Edison Rijna pleads. He understands that the transition of 10-10-10 requested immediate action. The constitutional structure and organization needed to function. Experienced people who knew the job needed to be in place right away. But concerning to Rijna more than five years later it is really time to hand things over and hire ‘yu di tera’. Even if these ‘yu di tera’ are not yet
qualified or experienced enough, you can get them ready by offering them traineeships and or coaching and teach them, give them the opportunity to grow and develop on the job. That way Bonaire, itself, will learn how to fish. In the committee the governor does all in his power to make sure Bonaire’s wishes in these matters are taken into account.

Energizing the youth
The governor wouldn’t be the governor if he wasn’t facing challenges. One of his biggest worries is the youth of Bonaire. They are Bonaire’s future but seem to suffer from some kind of collective indolence if not apathy. According to his experience young people have less respect, are lacking vitality and seem to be indifferent to whatsoever. The first time he was really confronted with and shocked by this general state of mind of the youngsters of Bonaire was at the graduation nights of the SGB ( Scholengemeenschap Bonaire, School for Secondary and Vocational Education) last year. Rijna observed the majority of the students didn’t even seem proud or showed some sort of joy; they just didn’t seem to care at all. To try to change this and re-energize the youth he is talking with groups of youngsters, making time for them, supporting and stimulating them to make plans. Members of one of these groups, the skateboard kids, made a proposal for a skating ramp. He is trying hard to make it happen and is offering them all the support they need. Being an active role model himself, ‘the practice what you preach’ idea, not only for the youngsters but also for their parents, his colleagues, the people who surround him and Bonaire as a whole is another way to show how things could be changed and improved. As a governor he is well aware, he as a person and as professional is being watched with a magnifying glass. All the better according to him because it gives governor Edison Rijna the opportunity to really make a difference by being the example he wants and needs to be.